1. Awareness of vocational identity
1.1 Courses, seminars on the complementarity of the Salesian vocation be offered both for Salesian Priest and Brothers (1986)
1.2 Short and clear-cut definition of who the Salesian Brother is for the common people, to help us explain the nature of the vocation when asked by parents, students and lay collaborators (1991)
1.3 Improve the understanding of the SB vocation in communities, by studying and using as jumping board the Salesian documents and Church’s trust for the laity as expressed in the Synod for Laity (1995)

2. Visibility of the person
2.1 We encourage the personal commitment of the Lay Brotherhood (1986)
2.2 The roles and functions of each confrere in the community be in accordance with his vocational status and capacity regarding the mission assigned to the community and the particular need of the Province (1995)
2.3 Let the SB have a constant contact with our lay collaborators (1995)
2.4 Possibly, let a SB be assigned in the formation teams at all levels (1995)

3. High quality formation
3.1 A definite scheme will outline the plan for specialization& updating of SB (1986)
3.2 Practical trainees be given adequate follow up in the field of specialization and religious formation (1991)
3.3 Let the biennium be opened for the East Asian Provinces (1991)
3.4 Let there be qualified formators to assist SB in their formation (1991)
3.5 Qualified SB at regional level as resource persons for ongoing formation (1991)
3.6 SB be relieved after a certain time of pastoral involvement in order to undergo ongoing formation in ones professional field (1995)
3.7 SB discerns with the Superior his area of specialization after the novitiate (1995)
3.8 The provinces will make available their resources for professional updating according the needs of SB (through a coordinating team) – 1995
3.9 During the initial formation let there be a balance between the common Salesian formation for Clerics & Brothers, with proper attention to specific formation (1995)
3.10 Opportunities on regular basis for the SB to take up courses/ seminars in Salesianity and Spirituality(1995)

4. Vocational promotion
4.1 Vocation campaign be centered on the Salesian vocation as such (1986)
4.2 Applicants be encouraged to express their desire to be either priests or SB (1986)
4.3 Each member of the community builds up fraternal communion as the environment for ongoing formation – it may contribute to the voc. Perseverance
4.4 Let’s strengthen our personal and communitarian commitment to become joyful and enthusiastic witness of our own salesian life – as a basic condition for vocational promotion (1995)
4.5 Let the SB learn how to proclaim their own vocation (1995)
4.6 Let the Salesians also consider the adult vocation in the voc. Promotion (1995)
4.7 Promote vocations through personal contact with the young, vocation camps, documentary figures, printed matter, posters on the life& work of EAO SB(1995)

5. Commitment of each Province
5.1 Annual meeting of SB in every Province, designed according the needs (1986)
5.2 Each Province does improve the idea of the person, role and work of the SB by organizing special activities: Seminar, Congress, Talks during the Retreats (1991)
5.3 Produce different materials (printed matter) for the SB Vocation promotion (1991)
5.4 SB Annual meeting at the Provincial level with delegates from other Prov. (1991)

6. Commitment of the Region
6.1 Encounter of all perp. professed SB of EAO every 6 years before the GC (1986)
6.2 Two week seminar on the SB identity, spirituality, mission on the EAO level for the SB – representatives; they will give echo-seminars to individual Provinces (1991)
6.3 Well organized ongoing formation of SB at regional level (professional and religious dimension) – 1991
6.4 Each Province will produce a video of the SB image and identity for eventual editing and dubbing in other languages (1991)
6.5 The Assembly will elect a Delegate that will coordinate/ monitor the SB affairs in the EAO Region (1991)

AUL (Australia – Pacific)
1. To organize a meeting of all Brothers in the Province to share this meeting fruits.
2. To make the above meeting a spring board for a series of meetings in the Province to re-awaken our understanding of the nature of consecrated life.
3. Prepare a collection of biographies of brothers in our Province (deceased and/or still living). For autobiographies, ask the contributors to include the story of their spiritual journey and growth, and not just a list of their appointments – something like St Therese’s “Story of a Soul”.
4. To recommend to the Provincial that a brother always be an integral part of the Formation Commission.

CIN (China – Hong Kong, Macau, Taiwan)
1. Confucius says that all reform begins with the reform of language. We propose that the Chinese terminology used to refer to the different forms of the Salesian vocation be standardized: Salesian Sau Si (Xiu Shi) for Salesian Brother, Salesian San Fu or Si Dok (Shen Fu or Si Duo) for Salesian Priest, Salesian Sau Sang (Xiu Sheng) for Salesian Cleric. We should also suggest to the diocesan seminary to refrain from calling its seminarians Sau Si (Xiu Shi) and to call them, instead, Sau Sang (Xiu Sheng). Let us invite the advice of experts in Chinese language and literature.
2. The Annual Retreat is a precious occasion of formation that touches most confreres. The Annual Retreats for 2006-2007, dedicated to the theme “Da mihi animas, cetera tolle”, will include half a day or a day of reflection on the meaning of Salesian consecrated life, both lay and clerical.
3. In vocation promotion, priority will be given to the Salesian vocation as such.
4. Through the 2006-2007 Annual Retreats, we will try to instill in each confrere the concern: “Before my death, I have to find at least one successor in Salesian life”.
5. Each community gives due importance to the daily prayer for vocations.

FIN (Philippines North + PNG&SI Delegation)
1. Echoing the seminar: the EAO Salesian brothers’ seminar in Cambodia will be echoed to the rectors during the rectors’ assembly.
2. Salesian Family: giving sufficient information about the Salesian brother vocation to the other members of the Salesian family.
3. Professional training: to implement the idea of professional training for the Salesian brothers after the postnovitiate formation on a case to case basis
4. Ongoing formation: to implement the plan that the commission on formation has made for the ongoing formation of Salesian Brothers who have been perpetually professed for 10 years, for the Salesian Priests who have been ordained for 10 years.
5. Formation guide: in the postnovitiate to assign a Salesian Brother as formator

ITM (Indonesia – Timor Leste)
1. Systematize the provincial formation program (contents of various stage), that all members can access to.
2. Weekly prayer for SB vocation, Bl. Artemide Zatti commemoration 15th of each month.
3. Regular meetings of the Quinquennium (priest and Brothers) in practical training
4. Celebrate the anniversaries of our Brothers (60th anniversary of Br. Ribeiro)
5. Encourage the participation of the SB in the formation of Aspirants (Venilale and Fatumaca) and in the prenovitiate

VIE (Vietnam – Mongolia)
1. A meeting will be held for all SB’s and the whole province to echo this seminar
2. A change of addressing the SB as SU HUYNH is proposed for all concerned.
3. Publications of SB documents (as many as possible and as quick as possible).
4. Posters and Fliers on SB should be printed and propagated.
5. Rector should accompany SB in the community, especially those in formation. 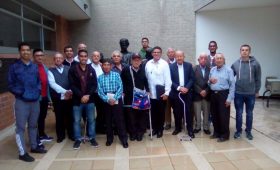 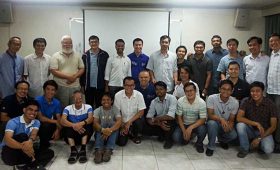